– Online Resource Announcement–
Attack of the Green Crabs! The Lobster Pot Heats Up! Acid in the Gulf! These slogans may sound familiar if you are one of the many educators who has used these educational animations as part of your teaching! GOMMEA is delighted to be able to offer one website home where you can view both Puckerbrush’s ocean comics as well as their keynote presentations at educational venues, such as the 2019 National Marine Educators Association (NMEA) meeting! This Maine-based team includes an alum of Maine College of Art who studied under the 2017 recipient of the NMEA Outstanding Teacher of the Year Award for excellence in teaching through a career, Doug Vollmer! In courses with Doug, Hanji learned of the invasiveness of green crabs, Carcinus maenus, and was inspired to learn more. This was the seed for Attack of the Green Crabs, detailing the scope and history of the problem here in the Gulf of Maine in an engaging manner that employs much humor. GOMMEA is so happy to house these resources on our website and we thank the Puckerbrush Animation team for applying their animation, research, and story-telling skills to connect people to the Gulf of Maine.

The 2022 GOMMEA Annual Meeting featured an interactive session with Puckerbrush Animation. Watch the session and explore more resources below!

Hanji and Andy are a Rockland, Maine based team and the co-founders of O’Chang Comics and Puckerbrush Animation (formerly O’Chang Studios).

We had the pleasure of hosting Andy O’Brien and Hanji Chang at the 2019 National Marine Educators Association Conference that was hosted in New Hampshire. We invited them to present the Stegner Lecture, which is a Memorial Lecture presented every year at the annual conference of NMEA. When GOMMEA began planning to host the 2019 conference, Andy and Hanji were immediately recommended as speakers. Watch the lecture from the video list below.

Hanji Chang is a Taiwanese-Korean painter, illustrator, graphic designer, and animator. She also teaches animation at Maine College of Art. Andy O’Brien is a Rockland, Maine-based writer, voice actor, and the communications director for the Maine AFL-CIO. Hanji and Andy are now the co-founders of O’Chang Comics and Puckerbrush Animation (formerly O’Chang Studios).

When they first uploaded a cartoon skit between two Mainers chatting about ice fishing, snowmobiling and “drinkin’ whatevah” in 2013, they never envisioned that Temp Tales cartoons would generate millions of views and a loyal fanbase. They thought to themselves, “what if we could use our cartooning skills to educate our fans and their kids about the threat climate change poses to our fisheries and coastal communities?” 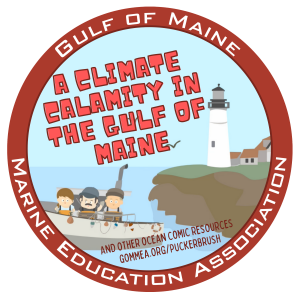 Together, they are a Rockland, Maine-based team whose animation studio has produced a variety of videos for educational and nonprofit institutions including the US Geological Survey, the National Oceanic and Atmospheric Administration, Louisiana Sea Grant, the Island Institute, the World Bank, the Red Cross, the Council on Foreign Relations and others. The studio is most known for its award-winning series “A Climate Calamity in the Gulf of Maine” about the impact of climate change on coastal communities and sea life.

GOMMEA is proud to host links to their work below, as a resource to all.

Attack of the Green Crabs

An animated short dedicated to all of the hard working clammers in Maine. Created by the team who brought you Temp Tales.

A short animation about the impact of global climate change on lobsters in the Gulf of Maine.

Created by O’Chang Studios Productions with the support of the Maine Sea Grant Program at the University of Maine.

Acid in the Gulf

A short animation about the potential impact of ocean acidification on sea life in the Gulf of Maine.

Created for the Island Institute by O’Chang Comics / Puckerbrush Animation.

In 1912, Maine anglers began the tradition of presenting the first spring salmon caught in the Penobscot River to the President of the United States. By the time George H. W. Bush received the last presidential salmon in 1992, the Penobscot River had just 2 percent of the salmon it once had. The last remaining wild Atlantic salmon populations in the United States–once found as far south as Long Island Sound–are sadly now only in Maine’s rivers.

Atlantic salmon and the threats that have led to their endangered listing. Atlantic salmon are part of NOAA Fisheries Species in the Spotlight initiative, which highlights imperiled species to focus attention and resources towards actions to bring them back from the brink of extinction. Learn about the various threats facing Atlantic salmon, including climate change, and about what you can do to help protect and restore Atlantic salmon, and their ecosystems in this animated video.

Did you know that there’s a family of fish found along the East Coast of the U.S. that dates back to the Cretaceous period more than 120 million years ago when dinosaurs were still in existence? Sturgeon! Two species of these ancient fish, the Atlantic and shortnose sturgeon, are found in coastal waters, estuaries, and rivers from Florida to Maine.
Though sturgeon have been around for millions of years, there’s still a lot we need to learn about these ancient fish to help inform recovery efforts. You can also help us recover these ancient species. Check out this animated video to learn more.
Created for NOAA Fisheries by Puckerbrush Animation.

In this Deep Dive Series webinar, Hanji Chang and Andy O’Brien, co-founders of Puckerbrush Animation and Film judges for our Ocean Awareness Contest, tell the unconventional story of how they became animators passionate about environmental issues and share some of their work as visual storytellers and comedians. Bow Seat’s monthly Deep Dive Series explores how we can communicate about the climate crisis in unexpected, fresh, and even humorous ways that grab people’s attention without sacrificing the message. Meet and learn from artists, scientists, community leaders, and activists whose unique strategies are pushing the climate movement to new creative depths. To learn more about the Deep Dive Series, click here.

GOMMEA invited Andy O’Brien and Hanji Chang to present the Stegner Lecture at the 2019 National Marine Educators Association (NMEA) Annual Conference held at the University of New Hampshire. For more information about the conference, visit http://gommea.org/nmea2019. For more information about Andy and Hanji’s work with Puckerbrush Animation Studio, visit http://puckerbrushanimation.com/.

The 2022 GOMMEA Annual Meeting featured an interactive evening online with the minds behind “Climate Calamity in the Gulf,” “Attack of the Green Crabs,” and more! Puckerbrush Animation works with science-based groups to raise awareness and educate through animations. Hanji and Andy talked about the process of breaking down complex scientific concepts and making them accessible, as well as entertaining. The session was recorded and is available here to watch anytime.